For those tuning in at home, yes, I’ve finally relaunched under WordPress, such as it is.

This all startedÂ back in 2007 because of the pending Blogger FTP cutoff. Â They pulled that plugÂ in 2010. Â In between, and since, I’ve been playing with numerous versions of WordPress, themes and plug-ins. Â  I’ve finally gotten the site back to the original level of functionality, including all the old archives imported from Blogger, and even the hand-coded deep archives going back to December 2001. Â I think that means that pretty much everything that was ever on this site is still here. Â Although, going by my first post, there must have been a precursor, I just don’t remember what it was. Â  Â Fortunately or unfortunately the Internet Archive does remember. Â Mmm Â mm, Â 1996-licious.

In any case, we’re coming up on the 10-year anniversary of this blog as such. Â Does it count when you’ve taken years off at a time? Â Will there be a party? Â Will I at least finally come up with a theme I like? Â Stay tuned to find out.

Have you ever noticed how difficult it is to read blog posts sequentially without using an RSS feed? Look at any blog–boingboing.net, any Wired blog, even this blog. Read the entire first page. Then try to read the next posting. None of them end with a “next” link (my blog used to, before I started using blogger). They end with “archives” or nothing. And if you click “archives,” you don’t get the next item you haven’t read; you get a repeat of the posts you’ve already read. So basically if you fall behind by a few days (or in some cases a few hours) you’re screwed. What up with that?

Blogger was down for at least an hour just now with this message:

Or, occasionally, this more interesting message… 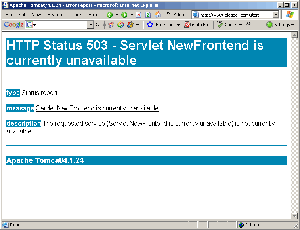 But no mention of a problem on the status page:

And it’s still not letting me log in directly via the Toolbar or “all my services.”

Has anyone noticed that Blogger always seems to break mysteriously right around SXSW?

I’ve gotten some complaints recently about old posts percolating to the top of the RSS feed. Apparently this happens when I go back and edit an old post. For example, the survey bias post from a while back, which was rife with typos, may be right below this now. The RSS feed sorts the posts by the “updated” timestamp (which I can’t modify) instead of the “posted” timestamp (which I can). This is just more Blogger (2.0!) suckiness that I can do nothing about. Except avoid typos and never go back and edit anything. I’ll try!

My other option is to go to WordPress, which I’ve been considering for at least two years, but I’m still not that desperate.