a.k.a. the De Lackner DH-4 Aerocycle

The pilot stood to the rear of the pedestal… and guided his craft by simply leaning in the desired direction of travel.

Sound familiar? Â Looks pretty familiar too (well, from the ankles up): 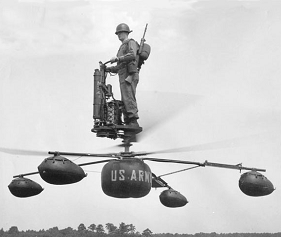 For those tuning in at home, yes, I’ve finally relaunched under WordPress, such as it is.

This all startedÂ back in 2007 because of the pending Blogger FTP cutoff. Â They pulled that plugÂ in 2010. Â In between, and since, I’ve been playing with numerous versions of WordPress, themes and plug-ins. Â  I’ve finally gotten the site back to the original level of functionality, including all the old archives imported from Blogger, and even the hand-coded deep archives going back to December 2001. Â I think that means that pretty much everything that was ever on this site is still here. Â Although, going by my first post, there must have been a precursor, I just don’t remember what it was. Â  Â Fortunately or unfortunately the Internet Archive does remember. Â Mmm Â mm, Â 1996-licious.

In any case, we’re coming up on the 10-year anniversary of this blog as such. Â Does it count when you’ve taken years off at a time? Â Will there be a party? Â Will I at least finally come up with a theme I like? Â Stay tuned to find out.