You may be reading this because you got a spam email from a random address at this domain. Looking at the bounce messages in my spam folder, it appears someone chose my domain and started generating random messages right around midnight last night for about an hour. This was not from me, nor any system on my network, which I have confirmed by analyzing the bounced message headers. The emails seem to originate from many different IP addresses, which would indicate that a network of compromised PCs is being used.

You should report the orginating IP address in the message header (or better yet, forward the whole, detailed email header) to your ISP’s abuse address.

Following up on my post from yesterday, I was thinking about social networks in term of personal return on investment: for some of us there really isn’t any. It seems Dave Slusher has some of the same concerns, and cites a Scoble post for contributing to his opting out of the whole SNS thing. There’s wonderful symmetry here because it’s largely Scoble that got me even considering joining a SNS.

What I’ve decided is that SNS is a bad idea for me for the same reason it’s a good idea for Scoble. Scoble’s a pundit. His job is to connect to a lot of people, keep his eyes and ears open for the next new hotness, and then distribute that information via his various output channels. Nice work if you can get it. But it’s not my work. Trying to maintain even a single presence online for me is definitely more trouble than it’s “worth.” My ROI on this blog is certainly negative, both in the short term (hosting costs, opportunity costs for time spent on each post and tweak) and the long term (expressing my honest opinions will almost certainly cost me friends and business down the road, versus the relative safety of staying politely quiet or concentrating on a more traditional, less sincere “marketing strategy”).

From this perspective, if I join, I become basically a social network wage slave. I sacrifice my time, energy, privacy, etc. and contribute content to this “thing” that ultimately doesn’t benefit me, certainly not as much as it benefits the network itself, or power users in a certain niche, like Scoble. To be one of the mooing masses on a social network has exactly the same cost-benefit ratio of being a cow in any other sphere. The obvious argument against what I’m saying would be to contend that SNS is not a zero-sum game, that everyone gains and no one loses. I’m not buying it. Like Slusher, I don’t feel like there’s been one tangible benefit to me from SNS involvement, or for that matter from maintaining any kind of content-based online presence (most especially including this blog). And, like Slusher, I know there are a million better, more fulfilling things I could be doing with my time.

I’ve been reading a lot lately about how to manage email and how between facebook and twitter you can do 90% of your job. And I’ve come to believe that most people, as the central function of their job, do nothing other than chat rather trivially with other people. Because I simply cannot do my job in 140 characters or less. I can’t do five sentence emails. Most of the work emails I get reveal to me that the people I work with haven’t the slightest clue what’s going on at any given moment on any given project. The occasional brain dump is required. I still document my code, if you can believe that.

In fact, the main service I provide, in a very detailed usually concise fashion, is the interpretation of vague and incorrect assumptions into working, usable processes and applications. Tell me how that’s going to get done over twitter?

I’m sorry to say it, but in the real world we write the specification as we go. We morph the process on a daily basis. And unfortunately that requires a little more documentation and accountability than you get from MySpace and YouTube. In the real world we work with SVN and SQL Server and FTP and Terminal Services and FogBugz and wikis and virtualization and yes, oddly enough, email. Occasionally we pass around a Word document. Shocking, huh?

Life is less fun, but more interesting, when you know you’re being persistently and expertly manipulated. (No links, because you’re soaking in it.)

There’s no way this is a “disease” or even a “condition.” This is called having a job and a cable modem. Stand-up comics have exploited this for years. In high school we called this acetylcholine deficiency. So you know it’s not new.

After a post yesterday over at ectoplasmosis trying to drum up business for his SciFi Scanner blog, John Brownlee today goes directly to the copyblogger playbook and boldy digs in on the wrong side of a hot-button SF issue in order to boost traffic. The issue: is The Fifth Element any good?

To even have this gig Brownlee must know that The Fifth Element is on many a fan’s desert island disks list (including mine). It’s fun and it’s gorgeous (the whole thing, not just Mila), and the mythos-/technobabble is the best since Ghostbusters (in fact don’t both films refer to “slightly greasy” atomic particles?). And to borrow from Jorn Barger’s canon rating system, it’s got a high “escape” quotient (high payoff for effort). It’s not deep, but The Fifth Element is both highly watchable and easy to re-watch.

This 1961 “interview” with Hugh Hefner is amusingly dated but surprisingly prescient on (just) a couple of points, including the always-looming puritan menace (or the perception thereof) and Hef’s own future-present (projecting himself in later life: ‘I’ll have all those “Playmates of the Month” around to keep my interest.’).

Yet there’s no escaping that Hef’s pseudo-intellectual, self-styled “masculism” always left him sounding like an inflated dick. A few issues later we have none other than Robert Anton Wilson pointing out Hef’s politico-economic naivete, while of course espousing his own socialist-anarchist worldview.

In both cases, these short, fringe-published works are remarkably true to the later-life character of these men. There’s a lot of other good stuff in The Realist archive if you poke around.

I’m a little shocked this still needs to be said, because it’s just about the only lesson I remember from every writing class I ever took. And I’m really shocked that a blog post about omitting needless words and writing clearly is so repetitive and fractured. But just so we’re clear: be concise.

Holy crap. Did we forget that great writers sweat over sentence structure and word choice? Read some Hemingway or Steinbeck whydontcha!

Update: I have a modern, blogging example of this: Jorn Barger’s blogging and writing are so concise as to be nearly uncompressible.

Update 2: It further occurs to me that there’s a term for uncompressible, unskimable text that distills only the essence of meaning: poetry.

Here’s an interesting argument that reading Harry Potter isn’t “real” reading–for adults, and it also debunks the “gateway” metaphor for kids–but simply participation in one more carefully-choreographed, highly-mediated event. I guess the good news is that culturally we appear to have some tolerance ceiling for carefully-choreographed, highly-mediated experiences. Maybe.

Getting past the idea of Harry Potter and his rabid fans being the philistines at the hedgerow of serious literature, this article also touches on the idea of the death of criticism and the ascendancy of the review. The difference is that a review is essentially a piece of marketing material, most often in favor of the piece, only occasionally against (in the context of defusing an over-hyped “project”). Criticism by contrast is comparative, attempting to get at the meaning of a work’s broad relation to other works and cultural memes.

The broader issue here is whether reading is purely escapist entertainment (book reviews perform the function of TV Guide), or whether it has deeper personal importance and meaning (the critical approach). This is an important distinction because in the former case reading is essentially trivial: like most mass media today, a base, simplistic reflection of populism and mediocrity (and what is Harry Potter, a book or movie consumed by millions of people over the same weekend, if not a mass medium?). In the latter case, if reading has personal meaning and importance, then the prevalence and condition of critical, thoughtful readers becomes a culturally vital issue. Harper’s has an extended article on this topic that I highly recommend.

On one hand this is my (semi-)annual license plate posting. On the other hand, we’re in Texas, which tends to rave in favor of the machine. And yet, this still gets to me: 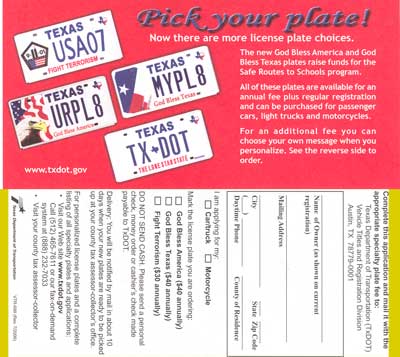 Yeah, it’s right there in the upper left: 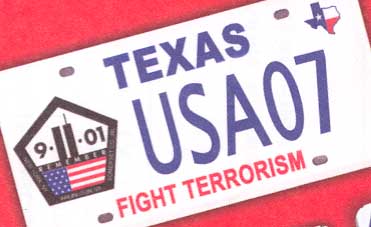 “Texas, Fight Terrorism, 9/11/01, REMEMBER” or some ordering thereof. Because I know you forgot.