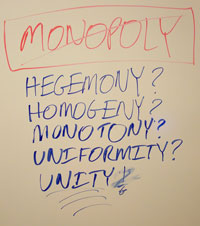 I just heard a radio commerical for the new AT+T “Unity plan.” Okay, first of all, “Unity plan” is a pretty creepy name. How long do you think the marketing department stared at the word “monopoly” on the whiteboard before coming up with that one? Second of all, “free calling to over 100 million numbers.” 100 million? AT+T just sucked up something like a third of the numbers in the U.S. without even really trying? Does anyone see a problem with this? Let me give you a hint. There’s exactly one computer operating system on the planet that runs on more than 100 million computers. You’ve probably heard of it. It’s called Windows. Most people agree that it’s evil.

But forget all that. I get home and Google “at+t unity” and land straight in the middle of a debate about AT+T and Verizon being in bed with the FBI with regard to warrantless searches! Because really, nothing goes with communications monopoly like cavalier abuse of police powers. Which just goes to prove, no matter how bad you think it is, it’s worse.