You spend an hour optimizing it into a view and you still have this: 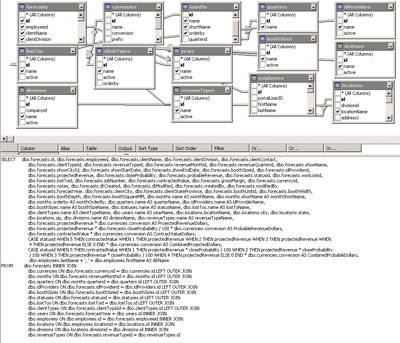 No, you’re not supposed to be able to read it.

I don’t know if this made it onto or stayed on anyone else’s radar, but there was a five-story skeleton of a planned 10-story Intel building in downtown Austin that was abandoned right around when I moved here, circa 2000, coinciding with the local nadir of the (first?) tech bust. Intel ended up with a much smaller presence in rented space south of the river, and nothing happened at the downtown site for six years.

Well, yesterday, they finally blew it up (by most accounts “they” being the federal government). To make way for… wait for it… a federal courthouse. Not just a federal courthouse (we have two already), but this Orwellian monstrosity. Didn’t we stop building stuff that looks like this in the ’70s? This design reminds me of the misplaced I.M. Pei structures of certain state college systems (SUNY comes to mind), except not as good. I spent more time than I care to recall wandering alienated through these landscapes of abandonment, ducking and cringing beneath the stained concrete and dirty marble facades of post-apocalyptic monoliths. Which is why I find this evocative editorial, overlaid with my knowledge of the area, so chilling: it’s going to be like Logan’s Run meets Red Square (hell, it’s already the Republic Square area–not far to go there). On the plus side, as you stumble out of the Gingerman at 2am, there should be plenty of jackbooted thugs around to help you navigate the barricades and find your car. Assuming there’s any parking left after they extend the security cordon. And by “help” I mean tazer you and beat you with batons.

You see where this is going, right? Tear down the remnants of the tech bubble; extend the massive apparatus of authoritarianism. Get used to it.

If you haven’t heard of Second Life, you might actually have a first one. If you have heard if it and been tempted to see what it’s all about, I’m going to save you the trouble.

You can click on the cubes and download scripts, which make you do something, or make your guy move around, or wear something. It was retarded. Imagine that every time you bought a shirt from a store, you had to install Windows on your torso.

Browsrcamp comes up every so often as a tip or trick for testing web sites on Mac browsers when you don’t have a Mac. The free service gives you a jpeg screenshot of what a URL looks like in Safari. For testing a homepage or template this is fine, but it breaks down in a dynamic context (for example: a site where you need to log in or where you’re using DHTML behaviors or AJAX).

But there’s also a paid service that lets you VNC into a Mac and actually watch how your site behaves in any browser (and they’ve got some weird ones). If you had a short-term project that absolutely had to look right on the Mac, this would be a cost-effective alternative to actually buying one–conceivably $20 could get you through your entire testing phase.

Given the number of times I’ve almost run out to Fry’s and bought a Mac Mini in a panic, I’ll definitely be using this down the line.

All it takes is a snowstorm to strand hundreds of motorists on a 50-mile stretch of Interstate 78 for up to 24 hours and cause an “almost total breakdown in communication” among state agencies, according to Pennsylvania Governor Ed Rendell (which, I’ll note, is not actually an explanation). Keep in mind, the Interstate system is supposed to be a priority transportation system, especially in times of war, and I-78 is refereed to as a “strategic” corridor for the tri-state area on a number of official sites (it’s designated “High-Priority Corridor 63”). In fact, it’s part of the emergency evacuation route for New York City. Seems like the kind of road you’d want to keep open. Plus, didn’t we throw a whole lot of money at this “communication among state agencies” problem after 2001?

First Paris Hilton has food thrown at her in Austria and has to leave the stage (and she looked genuinely scared, which is nice). Now J. Lo is booed to tears by a German crowd. Granted, either of these things could happen here in the U.S., but then we’re a bunch of hot-tempered bastards anyway. Throwing trash at Paris Hilton is downright poetic, so score one for the Austrians. But how hated do you have to be to get booed by Germans? I mean these are people who revere David Hasselhoff (although I bet “The Hoff” is pushing it with this role). My advice to celebrities would be to stay out of Hungary altogether–they’ll eat you alive! Ba-dum-bum.

If I’m reading this right, the EU parliament wants to ban “skinny mirrors.” While I’m glad to see the EU get on its feet and join the world community of utterly ineffectual legislative bodies who only seem to be able to agree on the totally trivial, I can’t imagine why they would be against skinny mirrors.

And apparently HP offers a digicam with “skinny mode.” That’s just obvious. I’m thinking let’s take it to the next level. Skinny glasses. Skinny contacts. Skinny windshields. Skinny fish tanks (because really, do you want your Siamese fighting fish to see how fat you are dancing around naked to Moby?).

And the best part about the skinny mirror (and possibly other SkinnyÂ® brand technologies) is that it makes really skinny people disappear. Like the vampires they are.

If you haven’t heard, there’s yet another Susan B. Anthony-sized coin coming out. There’s an interesting if opaque statement at the end of this article about the Mint’s accounting difference between paper currency and coins.

When a dollar coin is issued, the Mint â€œearnsâ€ the difference between its production cost and face value â€” now about 80 cents. If a collector saves the coin, another must be issued to replace it.

A banknote, since it is redeemable, counts as a government liability, and the Federal Reserve has to back it by buying securities, which earn interest. According to the Fed, there are now about eight billion dollar bills in circulation, so that interest income is considerable. Coins do not yield such income.

I’m a little thrown by who exactly is earning this “income” (investors in T-bills or some other instrument, I imagine), but I think what they’re saying is that paper currency represents a government liability on the books (and in the financial markets) but that coins are just “sold” to the public (at far higher than their intrinsic value). It’s a strange distinction only partially justified by the longer circulating life of coins–yes, a coin may circulate for 30 years, but it can’t depreciate, and it’s engineered never to have its intrinsic value exceed its face value, so it’s not really an “ownable” commodity.

This seems like an insignificant technicality until you consider the recurring push to eliminate the dollar bill. In that case, literally billions of dollars would switch accounting columns from “redeemable” to “other,” essentially allowing the government to “print” more money off the books. From this perspective, it’s shocking they haven’t done it already.

Some of you might be interested to know (okay, one of you, if “you” includes me) that Borland (as CodeGear, as turboexplorer.com) is still hanging in there with Win32 (non-.NET) development, and there’s even a free version now/again. You can’t find it from the real site, and it looks fake when you get there, but apparently this is legit. The product I’m referring to is Turbo Delphi 2006.

Here’s an article that goes into it a little more. I agree with the assessment that Delphi/Pascal is essentially a nostalgia project at this point (although I’m sure there are eastern European hackers shareware authors who would argue). But depending on what’s available out of the box (typically they’ve left out critical network stack interfaces in the sub-Pro versions), this is interesting to me because invoking the .NET framework (as you do automatically in Visual Studio) for a tiny helper app or test harness is computationally expensive and leads to its own version of “DLL hell.” Plus, the .NET compilers are offensively slow even with up-to-date hardware.

If I try this out and it blows me away in some regard, I’ll follow up.

Faith-based sexual health counseling strikes again (a problem we’re wearily familiar with here in Austin). In case that first link dies, basically some third-party sex ed teachers used shared gum as a sexually-transmitted disease vector metaphor (I guess, or maybe just as a gross-out), apparently not realizing it’s an actual potential disease vector. Obviously they’re not up on their Chains of affection: The structure of adolescent romantic and sexual networks.

While the students in the class probably didn’t learn anything positive from the exercise, this is an ironic and unintentional study in so many teen/Gen-Y issues–peer pressure, failure of the education system, mixed messages from on high, the perils of obedience, Schadenfreude (“It was fine for me, because my best friend and me [sic] did it first!”), etc. I also imagine this turned into a perverse game of “is he/she hot or not” to keep it rolling, since only the person right before you counts, right?

I don’t know which is scarier–that the “health” instructor got 18 kids to chew the same piece of gum at the absolute height of cold and flu season or that the director of school health services characterized this as “a low risk of spreading the cold or flu.” Um, if cold and flu can’t spread by the direct transfer of saliva from one person’s mouth to another, how the hell does it transfer? Maybe they got over zealous redacting evolution from the textbooks in that district and threw out germ theory as well. And really, it’s cold and flu if they’re lucky.

Oh, and no way were we dumb enough to fall for this in high school. I’m serious. But we had The Boss.

Blind faith in your leaders, or in anything, will get you killed – Bruce Springsteen