It’s tempting to utter a phrase like “the cyclical nature of crime,” as a way to gloss over the more poorly understood aspects of a problem, as this article does. But if you’re familiar with logical fallacies, you have to ask, is there really a cycle, and if so, where does that cycle come from? Fortunately, they hint at an answer on page two.

When the country faced a rise in violence in the early 1990s, federal and local authorities responded with a crackdown that sent thousands to prison.

“Those folks have to come back out, and they donâ€™t have jobs,” Wexler said. “You know what theyâ€™re going to be doing.”

And where did that “rise in violence in the early 1990s” come from? Let’s see, possibly from a prison population explosion (and resulting expulsion) from the 80s’ war-on-drugs arrests (you know, the ones that were actually hard-core enough to warrant real prison terms)? Nah, couldn’t be. And so on.

It’s important to realize that these bubbles–the Baby Boom, the Internet bubble, the Housing bubble–are political and sociological effects. We do these things to ourselves through our short-sighted policies and prejudices. In the case of our exclusively-punitive criminal justice system, the effects are direct, if deferred: a generalized crime crackdown now mean a crime wave in our future.

Jorn’s at it again. And yes, Jorn, I know that you have a technorati bot plus about nine others that will grind to life and spit sparks at the mention of your name in the blogosphere. I’m cool with that if you are. And I know you are because this is all so hopeless(ful)ly meta.

I just emailed a friend of mine to say that Jorn’s Robot Wisdom Auxillary reminds me a lot of the stuff that used to pass between two desperately grasping teens/20-somethings as we wrote (dot-matrix printed) 30-page letters (remember, before there was a universal medium for these things?) back and forth to each other or drove around for hours at a time on 88-cent gas and 89-cent Slurpees debating… well, everything. And that’s a compliment. Because if you can channel and harness and maintain (give me the strength, please) that level of both angst and focus, such that I compare you to a couple of (meaning two, in a dialog) smart, pissed-off, non-conformist, confused-to-the-point-of-immobility/-drastic-action guys debating the fabric of reality and the continua of existence then, dude, that’s props.

First we have the layers of identity. Anyone who blogs has to experience this. Who will read this? Who will link to it? What will they think? Have I stirred up some shit here or merely stirred the pot, or worse been pedestrian, cliched? In what way will this validate me and prove/justify/challenge my existence? It’s like a Murakami novel.

And that’s just the primer. Because then we have “The idealism crushers,” which by its very name taps into a deep well of revolutionary spirit. Even the URL is uniquely reactionary. You can’t not be pissed at these people, whoever they are. Because it doesn’t matter what “your” or “their” (I know, quoting pronouns, so 70s) ideals (and talking about “ideals?” get me a VW minibus!) are, crushing ideals equals not good.

What’s really amazing is that this blog is always in non-prose format, which would tend to make me think “inaccessible.” But there’s a certain usability, and even charm, to hitting return as punctuation. Which is one of the keys to reading actual poetry that they never explain. The line breaks are intentional! Intentional, as in “with intent,” as in they have meaning. Like everything else. It’s called writing, folks, and it’s meant to manipulate you. Like everything else. Revel in the body, sister.

Oh, and as far as “The Stalking Expert” I have two googlebots that trigger daily: Arthur C. Clarke and Bruce Sterling. What does that say? About me? About us? (That’s “us” to “you.”)

btw, concocted with Writely. Why even have an OS/file system/computer at this point?

I don’t know how many of you have messed around with Writely, Google’s online word processor, but I had to take a quick note today, and rather than decide how to file it on my hard drive, I decided to just use Writely. So I typed in some text and did some formatting. Then I accidentally dragged one of the toolbar buttons into the body and it inserted it as an image into the document (pretty neat, if useless)! Then I wondered, does Writely show me the HTML of what I’m doing? Yes, of course (and it’s a lot better than Word’s HTML, let me tell you). And then I thought, what does it do with the inline images? And so I looked at the HTML. And these images are hosted, because how else could they show up in the document (especially shared and collaborative documents)? And then I wondered, okay, so how does it know that I’m looking at those images from inside a Writely document, or even if I’m a legitimate viewer of those images? Well folks, the answer is, at least so far, it doesn’t. For example, this blog post is a shared Writely document. Anyone in the world can view it. Interestingly (for the sake of this post, not in the sense of actually being interesting), this document contains this image:

That’s only 21K, but it’s definitely hosted at Writely (for the purposes of this blog, it may be hosted somewhere else, but if you go to the document, it’s definitely hosted at Writely). And what’s really weird is, I had originally inserted the full 1.5-megabyte raw original of this image (Writely’s limit is currently 2 megabytes for images). Writely issued this link, and even after I deleted the image from the document, that link continues to work. I fully expect that link to rust, but if so, I have another, private document with that full-size image inserted, which they can’t very well delete, because it’s embedded in a document. But you can publicly view that link too!

Looks like Google is in the process of releasing a lot of stuff into the wild all at once again. In fact, I’m writing (and with any luck, posting) this blog post from their online word processor: Writely. Many standard word processing features are represented, but I’m particularly interested in the collaboration functions (for example, view this blog post as a public Writely document).

While I admit that taking a break at 1:30am from building, testing and launching custom web applications to watch a couple of guys build, test and launch a salami rocket can be quite diverting, today there is no need to call the Mythbusters. In Austin, Texas, when it’s 103 degrees, you most definitely can fry an egg on the sidewalk. 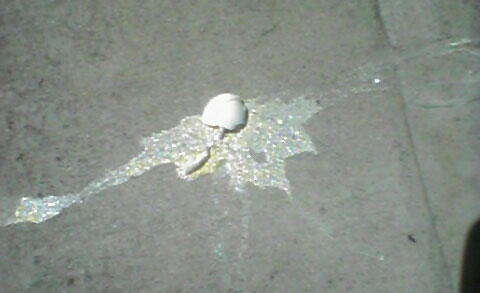 Notice the shimmery peaks? Either that egg fell from such a great height that it was meringued on impact, or it’s frying.

For scientific accuracy I will note that it did not appear to be a chicken egg. Possibly grackle.

And the winner once again, for the tenth straight year running, for the most egregious misuse of imagery is… msn.com. Big surprise.

I mean the fact that they told anyone to wear that belt… But really the problem here is the crop. Seriously, if you’re going to have any hope of making a skinny woman with no waist look like she has curves at least show her breasts a part of her body that isn’t a perfectly straight line!

Taken in context, the situation actaully gets worse. I imagine all of these images have been reduced from the print magazine article due to rights restrictions, so none of the details they’re trying to point out are visible. This makes the article seem primarily to be concerned with maligning the jeans and white T-shirt (oh yeah, and stand against the wall like you just got picked up for DUI) look. Do any of these women actually look better in the reccomended ensemble? It’s at best a toss-up at this resolution.

And to think, I once wrote content for this site. (shudder)

For some reason I assumed the Dungeons and Dragons creator no longer existed, if he in fact ever existed (I mean with a name like “Gary Gygax,” you had to wonder). Apparently he does, and is available for interview.

Ah, the innocence of the ’80s. Remember when the term “RPG” didn’t need to be qualified?

Got some time to kill? How about 5 hours and 39 minutes? Then take the Google Factory Tour! 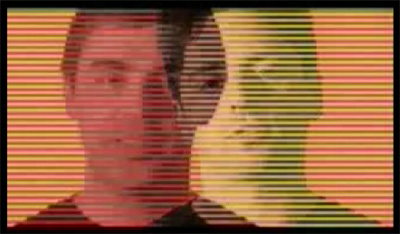 UPDATE (Bonus Google Conspiracy Theory): A Google “I’m Feeling Lucky” search for Video Search Engines on a Plane takes you to the Google Video homepage. Does this mean that after they’re done conquering the office suite and operating system segments Google is going to take on the schlock-thriller-starring-Samuel-L.-Jackson market?

The autobiography of Nikola Tesla, the original steampunk, is currently in rerelease. He may have been a little nutty, but I never get tired of reading Tesla’s nearly-metaphysical ramblings on wireless power. And as Bruce Sterling points out, his “World-System” sounds a hell of a lot like the Internet:

It makes possible not only the instantaneous and precise wireless transmission of any kind of signals, messages or characters, to all parts of the world, but also the inter-connection of the existing telegraph, telephone, and other signal stations without any change in their present equipment.

Okay, so he predicted packetized data, email, Napster and Vonage. But where’s my cordless blender?

My buddy Jorn’s daily livejournal Flickr stream lets me see some of the best stuff on Flikr without having to wade through all the crap. But it also serves to make me a little self-conscious about my digital photography skills and equipment, and to some extent my life.

It’s a lot like the celebrity effect: Because for many of us media stimulation competes with personal interaction both in terms of time and total impact, we come to expect everyone to be smart, funny and pretty at all times. With Flickr–especially with Jorn acting as a filter–it seems like everyone is constantly well-lit and having fun. I’ve been building up some pretty strong walls against this crap, starting in junior high (when, I think, most of us first consciously process the idea that other modes of expression and interaction might be more interesting than the ones we’re currently engaged in), but sometimes the shinier and happier than thou still get to me.

I suppose the logical fallacy here is in accepting Flickr as any more “real” than Hollywood, or for that matter the Internet. Because of the multiple layers of intent and filtration–who points the camera, who poses, how much setup was involved, which images were posted to Flikr, what Jorn chose to point my attention to–the experience is very much intermediated. Flikr is certainly not journalism, nor even chronicling. Taken in aggregate, it’s at best a chaotic, unintentional brand of entertainment. And if we know that, we’re probably safe, or at least free, just as we are when we drink the shot of tequila, accepting that it’s poison, but comfortable with the trade we’re making for a little pleasure.

Humans are notoriously poor witnesses under the best of circumstances–we know this about ourselves. And yet even in still frame, with the sound turned down, we’re inclined to believe that what we’re presented with is real. So I think we’re still tricked into real emotions when we look at something like Flickr–we both empathize and feel jealousy, experience the thrill and a little guilt. Voyeurism still feels voyeuristic–the good and the bad–even when we’re not sure what we’re seeing is real.