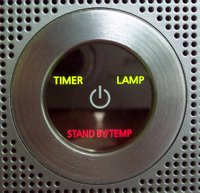 So it wasn’t the bulb. DHL delivered the new one before 10am on Saturday as promised, and after some coffee to steady my nerves I performed the surgery (nitrile gloves and all). Same behavior–multiple power cycles resulting in the three flashing lights. So what this means is it’s a bigger problem, not a user-serviceable part, probably the ballast or a controller board. Occasionally I can still get the set to boot, but an hour later it won’t.

I checked the file again and due to “what year is it now?” confusion I discovered that the TV is only one year and one month old. Of course it had a one-year warranty. We have an extended warranty (take that, Consumer Reports!) from a third-party company, but I decided to try Samsung first. After only about 30 minutes on hold, I got Alisha, who I have to say gave me the best telephone customer service since Gateway was called Gateway 2000. To make a long story short, she extended my original warranty to 15 months and a technician should be calling me tomorrow.

The withdrawal symptoms though intense were surprisingly brief. Since the DVR down converts HD to composite video, I’m still technically able to watch HD programming, albeit deeply letterboxed on a worn-out fishbowl 25″ CRT. In fact, I’m starting to see the appeal of being able to watch video on a cell phone. Not.