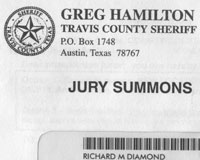 Apparently Travis County does. A big fat piece. I already had a Thursday morning hearing scheduled to protest a blanket 12% increase in the appraised value of my home (in an utterly flat to declining housing market, at least in this neighborhood). Then yesterday what do I receive? A Jury Summons!

I have to admit, I’ve spent the last 19.5 years successfully (and legally, as far as you know) dodging jury duty. For some reason I felt like it was one of the four or five worst things that could happen to you as an adult. I think this goes back to high school when I took some law classes in which all we seemed to do was take field trips to the county seat and tour government facilities. And though being locked in a cell for 15 minutes and getting “scared straight” by felons (though DWI was probably the most heinous crime represented, and the scariest thing about the prisoners was that they all had horrible dandruff) in the prison chapel were certainly formative experiences, it was probably the tour of the jury duty waiting room that most scarred me. All those poor people sitting there all day long with nothing to do! It seemed like some kind of nightmare trip to the DMV in which you were never even allowed to get into the endless, serpentine line. You just had to sit in a chair with nothing to do but watch talk shows for hours/days/years. You know, kind of like living in Louisiana.

Strangely, when I received this jury summons, it was almost a relief, akin to what I’m sure a bank robber on the run feels getting picked up at the border after living in Mexico with his reformed Tijuana donkey girl and doing nothing but drink beer and relax (well, and occasionally pretend he’s a donkey, of course) for 20 years. So yeah, a bittersweet relief you might say. But seriously, I’m kind of looking forward to it. Of course for all the wrong reasons.

I should not be on a jury, especially in Texas. I’m an atheist and an anarchist. I want to stick it to the man so bad I can taste it. I don’t even have a case yet and I’m envisioning hanging a jury on some minor possession case and then somehow parlaying that into a book deal and a tour of the talk show circuit. Where all those poor people waiting for jury duty can watch me! It’s my civic duty, you know?