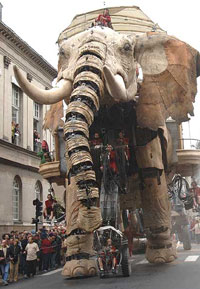 But it seems to involve a wooden spaceship, a 20-foot-tall marionette and a giant, quite-possibly-steam-driven, 40-foot-tall, walking animatronic elephant. My non-existent French is rusty, but I think this has something to do with the 100-year anniversary of Jules Verne’s death. Either that or Burning Man just happened to take over his home town.

Does it strike anyone as amazing that we can just whip up a giant, drivable, walking elephant these days and use it as a parade float? Does that seem a tad decadent? I mean we’re used to special effects, especially those involving elephants. But I seem to remember something about making vehicles and robots that walk actually being a challenge. Did we just solve this problem while I wasn’t looking, and then instantly scale it up to a point where one of these things can sashay through a crowd, no problem? Because if so, we really are living in the future, and Jules Verne would be proud.

update: On closer inspection I see that the elephant’s legs are not load-bearing but are, in fact, suspended. The elephant is basically a giant puppet on an articulated tricycle chassis, complete with on-board puppeteers to control the appendages. Beautifully done.