As if the $39 dual-layer DVD burner and 15-cent DVD blanks weren’t enough of a loss leader, Fry’s today goes back to their roots (at least here in Austin) and offers up a hot dog and soda for 25 cents. And seriously, you and I both know the “limit three per customer” really implies “per times through the line.”

While it’s tempting to invoke the image of Ignatius Reilly and say that Fry’s is enabling the stereotype of geek as overweight slob, I’ll note that invariably and ironically the first item they run out of is Diet Coke. You know, “‘cuz I’m tryin to watch my figure.” 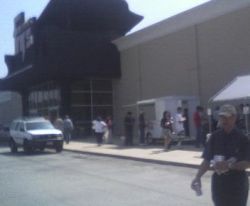 (The real irony being, and I think maybe Coca-Cola owes Jack Black some money over this, is he says “Now if you could take a Coca-Cola, and just go half Coca-Cola, half Diet Coke…’cuz I’m tryin to watch my figure…Tryin to loose some of the weight” and the Coca-Cola Corporation turns that into a product. This is just like when the Barenaked Ladies invented pre-wrapped bacon and then Hormel [et al] just ran with it! Forget MP3 downloads, these are the intellectual property rights songwriters should be pursuing.)