So here’s the deal: I now officially own a “classic vehicle.” Well, maybe not in Texas, but in some states. Yes, my motorcycle has now turned 20 years old. What’s really scary is, I bought it new. For cash. Don’t try that in 2005.

These days, I only ride three days a year. Considering it costs me about $200 a year to keep it registered, insured (with theft!) and maintained, this isn’t too bad as hobbies go. The only reason this is possible is because Honda so over-engineered the thing in the first place. That’s why I can let it sit for nine months, let the gas go stale and the battery go dead, then go out one afternoon in April, casually put air in the tires, lube the chain, turn on the ignition and fuel, and kick the kickstarter once. Yes, once. And it fires to life. And I drive away. I’m not sure there is any other technology in the world like that. You want this thing on your side when the shit comes down, believe me. This isn’t mission-critical engineering, this is post-apocalyptic engineering. This is technology for people who have backup backup generators.

If you ever wondered what the hell the “A4” paper size was, and needed to go beyond the “it’s about the same at ‘US letter'” level, then prepare to have your noodle baked. Because not only is A4 metric, it’s recursive, exponential and proportional! Jesus, no wonder America is the dumbest place on the planet. We test for this crap–everyone else just assumes you know it. And the Bn and Cn formats? Let me put it this way, if you didn’t take A-levels, you don’t want to know.

See what I mean? I’d move, but I’d have to go back to grade school.

Talk about failure: I failed to post for so long that Google switched from a daily crawl of my site to a weekly one. This means that not only is my index page out of date in their cache, but my ads are a week out of date as well. Wow, that’ll teach me. At least you hope, I know.

What’s really interesting is that Google’s behavior I’m sure mimics that of my readership. How many days can you not post and still expect to have people and bots show up every day? This is a lesson they tried to drill into us at SXSW. Did I learn? Yes. Did I care? Apparently not for the last two weeks.

At least I still have the top hit for church covert op. Take that, Scientology.

But I hate that it’s always a six-hour drive away. Still, a Van Gogh tribute gallery in west Texas? That’s almost worth the drive. You can almost hear Jack Black singing in the background, “…this is just a tribute, you gotta believe me…” Hell, I drove out to Art, Texas just to see the town that was for sale back in 2002. I wonder what ever happened with that. If you want to see the definition of “middle of nowhere,” check this out.

A winery that is. Though preferably not a Bush-supporting, aquifer-depleting one like this. It’s too bad, because the wine is actually pretty good, and cheap. I had my entrepreneurial hopes raised by the Austinist‘s claim of the Becker vineyard running on only 20 acres of vines. Considering they’re basically a household name here and seem able to keep Costco supplied (not to mention both White Houses–the “real” one and the bubba one in Crawford), that gave me hope. However, it turns out they have 47 acres of vines and over half of them predate the Becker label. Oh well, I can keep dreaming.

It’s a clear sign of how little I’ve been reading the Austin Chronicle lately that I found today that I’d only read two out of the last six “Letters at 3am,” Michael Ventura’s every-other-week column. This week’s a doozy, predicting nothing less than the end of the world as we know it. The column single-pagedly reminded me that I’ve always been a more or less deeply-closeted anarchist, as I sat grimly chuckling over the total collapse of civilization and barely containing a Burnsian expulsion of “Eggs-cellent.” Not so much because I desire it, but because I’ve sort of expected it all along. Probably has something do do with being subjected to The Day After at a formative age. My parent’s generation had the duck-and-cover cold war, which could (more or less) peter out, but my generation has had an endless supply of fresh pending apocalypseâ€”nuclear, chemical, biological, terrorist, natural, global, extraterrestrialâ€”to keep us on our toes. It’s sort of anticlimactic that the old-school four horsemen like plague, pestilence and co. have been replaced with oil, money, politics and urban collapse, arriving not upon stamping ethereal steeds but in black SUVs and private jets. You know, as anticlimactic as the apocalypse can actually be.

If you’re not an Austinite, you may not know about Ventura, and that’s too bad because he doesn’t talk about Austin much. You could say he’s a big-picture guy. I recommend reading his whole back catalog of Letters columns when you get the chance. They’re 151-strong by now, but they’re short and densely-packed with literary-intellectual goodness. If you can’t quite bring yourself to do it, at least read this one, which is uncharacteristically apolitical and personal, but nicely captures why I’ll read Ventura every time I pick up the Chronicle. It also makes me desperately want to read the mentioned books.

You may not agree with him politically. Even if you’re a liberal, you may not be able to stomach his hard-core projections of just how fucked we are right now. He pulls no punches. But if you can make it through, I think you’ll find yourself enlightened. If you’re anything like me a light will go off, from time to time, and you’ll think, “yeah, that really pulls it all together for me.” What more can you ask from a writer? 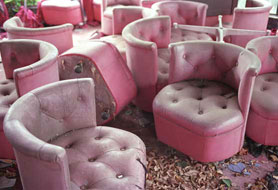 Because I love stuff like this. Mmmm, photo galleries of abandoned shit. I think I need to be alone right now.

But seriously, who could walk away from a pink leather upholstered chair, much less a hundred of them?

Does this sound like a movie pitch or what?

So a lab accidentally pulls a 40-year-old plague virus out of cold storage and sends it all over the world in test kits. Scientists unknowingly begin testing with the virus, but initially have trouble identifying it because it hasn’t been seen in so long. Meanwhile, on the other side of the globe, people, young people, only people born after 1968 it turns out, begin contracting a mysterious flu-like virus. Finally a lab in Canada accidentally figures out what’s going on and saves the day.

Amazingly, I only had to make up the middle part, the part about anyone actually getting sick. The rest is true. Even about Canada saving the day. Which would never fly in a real movie pitch.

Wow, the folks at Adventure Alliance, right up the road in Georgetown, TX, really do it all. From Covert Ops training to church retreats (see, you get your “adventure” and your “alliance”) to operating the world’s largest portable smoker (well, “portable” if you happen to be a teamster).

So next time you need to slow smoke 2000 pounds of meat while simultaneously cooking 1000 hot dogs, building your team, getting your god on, and learning covert ops and survival skills, you know who to call.

Saw this monstrosity pulling into the HEB parking lot at Mopac and Parmer the other day. Man, remember when Hummers were cool? 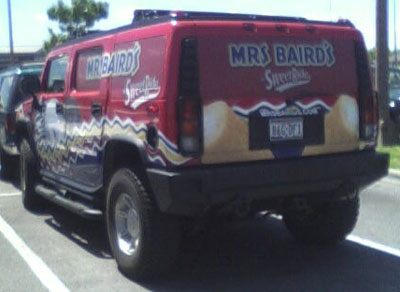 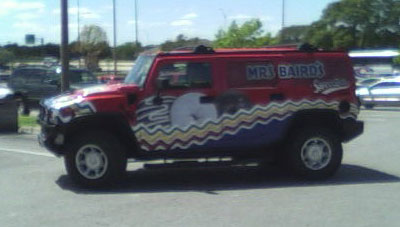 It’s hard to read in the pictures, but this thing is dubbed “Mrs. Baird’s Sweet Ride.” But it was a guy driving it. I bet it’s a big hit with the desperate housewives.

Another intrepid blogger has also seen this thing, but I’m the first with photographic proof.